Off topic material hidden
Reading some of the posts on here by creationists and other want-to-be scientists has enlightened me the how much our education system is failing us. This is truely appalling and sad.

I guess I should start a new thread on this aka "Is our eduction system to blame for the pseudoscience spouted by creationists and IDers?". What do you think Percy and other moderators? Is this acceptable for a new thread?

Do you just make this up as you go?

How do you think divers get the bends? Nitrogen bubbles form in the divers blood as the nitrogen gas which was previously compressed and disolved in the blood expands. This expansion of gas caused by decompression can produce fatal results if it happens quickly enough. This is just one amongst thousands of examples of how gravity and atmospheric/water pressure can cause gas to compress or vice versa.

What is at equlibrium? Be specific. Otherwise this is giberish.

Resorting to God of the gaps now. What a cop out. Besides this is a strawman argument you conjured up out of thin air. Stellar evolution is a verifiable scientific phenomena. All we have to do is take a look at our own Sun and see how the fusion of hydrogen into helium and other heavier elements occurs to understand the basics behind stellar evolution.

My motive is not to be mean or vindictive. It is to give you a wakeup call into reality. However, if being nice helps you understand better I have no problem with this.

I do not have a triple doctorate and actually do not even have a Bachelor degree (though I do have an Associate Degree in Computer Science). What I do have is healthy dose of the purpose of science and how the scientific method works.

Not to be mean, but there is a recurring problem on this board with people who have barely enough education in the subject matter to try to use scientific concepts to back up their worldview but not enough to really understand the concepts they are trying to talk about. Do some reading before sticking the proverbial foot in the mouth again.


Re: Stars do not form

Because the amount of energy caused by an increase in pressure and temperature is not enough is not enough to produce spontaneous fusion. It is not until the Coulomb Barrier is overcome that nuclei will begin to fuse together spontaneously to form larger nuclei.

It is only when enormous nebulaus clouds of gas, dust, and other material are large enough to create the Jean's instability phenomena that Cave Diver pointed out earlier that gravitation overcomes the internal pressure of the gas itself and causes it collapse. At this point stellar evolution is inevitable as the gas eventually collapses to the point in which the Coulumb Barrier is overcome and spontaneous fusion occurs.

Primarily because stars do not "wink into existence". Rather they slowly evolve over hundreds of millions of years as vast clouds of gas slowly collapse to form a protostar and eventually T Tauri star then mature stars.

Image of star 'birth' at the centre of the tiny Papillon Nebula observed using Hubble: 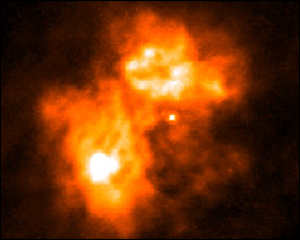 False. Then why do we see nebulae and other gaseous regions in interstellar space?

Because the solid surface of the Earth itself impedes gas from being condensed to a small enough area at the center of the Earth to create pressures and temperature high enough to overcome the Coulomb Barrier, spontaneous fusion does not occur. Besides this would not be near enough gas to create enough gravitational force to overcome the internal pressure of the gas at the center and cause atomic nuceli to fuse together. Typical stellar birth nebulae can be hundreds to thousands of light years across.

Actually star creation is the result in the decrease in entropy in a certain region of space.

I already showed you.

It is not only easy but inevitable once the Coulumb Barrier is passed.

With accelerating cosmic expansion this will never occur.

You don't have to, but don't expect us to believe you with you providing evidence to support your claims.

That is not really what the Big Bang theory asserts. The volume of spacetime itself is actually expanding or more accurately stretching. There is no 'outward' as 'outward' would implie there is something the universe is expanding 'into'. It is actually a misnomer people uneducated in astrophysics purport that the Big Bang is an explosion that through matter outward into empty space.

Yes heat loss is entropy but entropy can be reversed in an open system.

Photosynthesis is just one of many examples of decreasing entropy in an open system. Other phenomena include the evolution and growth of life, the formation of crystals, net increase of energy from the Sun which drives climate and other natural phenomena on the planets and moons of the solar system, etc.
Off topic material hidden

Well, it depends on what you mean by a "evolutionary". Do you mean biological evolution or all types of evolution i.e. cosmic evolution, stellar evolution, etc.

Steady state theorists such as Frank Hoyle and others had no problems with stellar evolution. They just disagreed with exactly how the universe originated.

Bullshit. I would venture that most scientists are religious in one degree or another. The problem is when you bring the pseudoscience of creationism and intelligent design into credible scientific endeavors.

Mention it all you want. Just don't call it science. It is philosophy and religion not science.

That is why we see millions of atheists who are miserable and committing suicide every day.

Most atheists I know (including myself) have families and enjoy very fulfilling lives.

That's nice but this is an argument from authority fallacy if you think this gives your position more credence.

So are you confessing you are wrong? Sorry you just walked into that one