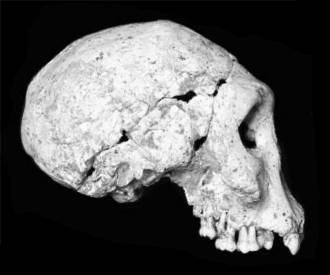 The question is, can you prove that this skull of an extinct ape which you evos call Homo Georgicus is actually and in fact a human ancestor? Or better still can you prove it lived over a million years ago as you claim it did? Absolute evidence for either claim would suffice.

But we wont get any of course. All we will get are more claims of the overwhelming evidence which exists but which we must take on faith as being real at all. And great thread calypsis, the evos will squirm and waffle but the fact is they found the fossils, many of which they originally considered solid evidence of evolution until they found they still exist unchanged these millions of years later. We must give them credit though for being able to obfuscate on any issue raised which conflicts with their religion which they cling to with the faith of a true fundamentalist.

Here's the problem Bluejay, only in the minds of evolutionists will this chart be considered evidence at all. I want to see the quality and completeness of the fossils used to come to these conclusions. Conclusions I submit are fallacious since you can't prove your fossil record is accurate, nor can you prove the ages of these fossils are accurate. Everything your so called science offers in these eloquently written dissertations which claim to be based in fact are nothing more than unprovable assumptions which which make massive leaps of assuming facts which are NOT in evidence in order to come to conclusions which cannot be sustained in reality.

Great, thanks for agreeing with me that you can't really prove anything you claim, yet you promote it as assumed facts anyway. The fact is that based on this statement you have no right calling evolution a science in any way. It is nothing more than a conglomeration of collections of bones which people from all around the world are attempting to catalogue and interpret. But when the reality is that with almost every new fossil discovery, the previously discovered fossils must be redefined and recategorized, it should be obvious to you that what is taking place isn't a science at all. It's a guessing game.

Not at all. Our problem is one of factual deductions which are universally fluid in evolution science while the basic facts upon which other sciences rely are absolute, even though new technologies and applications are added to them as we learn more about the respective science. Let me give you a twofold example here.

First, regarding the problem of the fluidity and constantly redefining ages and placement of fossils in the record, let's look at the history of the automobile. Here is a link to some of Jay Leno's classic cars. http://www.jaylenosgarage.com/at-the-garage/classics/ The second video down is of the 55 Packard Caribbean. What kind of confidence or respect would we have for the history of automobiles if next week, after getting in another 1955 Packard Caribbean, Leno announced that he must revamp his prior year of manufacture for the video above and redate it to a 1953 Packard? Would we call this a reliable science worthy of museum exhibits if cars couldn't be accurately categorized in absolute and consistent terms? I think not. It would be relegated to junk collections which have no value at all since nothing about their place in history could be confirmed absolutely at all.

Also, has the automotive physics which made this Packard run in 1955 changed at all when compared to the internal combustion engines of today? Not at all. Sure we have learned to make cars more efficient and powerful while more economical. But the physics which causes them to run hasn't changed at all. We have also discovered different types of power plants like hybrids and fuel cells but they are determined worthy of production based on their ability to live up to the standards of reliability established by the internal combustion engine decades ago.

But what do we have with evolution? A constantly redefined interpretation of the existing evidence based on every new piece of evidence discovered. Yet at every turn when the ages of fossils are discussed in a vacuum, their alleged ages are stated to be absolutely known and confirmed. But keep in mind that just 10 years ago, none of these absolute ages existed as they are stated to be today at all.

Here's a simple timeline as evidence of what is currently believed, but has little relevance to what was believed to be true when I was in school in the early 70s when the earth was believed to be only 2 to 2.5 billion years old. My point being that if evolution was founded in actual and unchanging facts as all other sciences depend before moving on to establishing other new conclusions, the information gaps would constantly be filled by new discoveries, but at no time would the previously discovered facts have to be revamped, recategorized or redefined as is the reality with this cult like pseudo science.

So, to summarize, nothing you post in the way of evidence has any relevance in reality since you can't prove that any of your conclusions are testable, provable, supportable by real science or will sustain the test of time in any way.

Edited by Archangel, : No reason given.