Basically yes, although the sediments were likely somewhat consolidated to fully lithified when they were eroded. However, without knowing more about that particular photo, I hesitate to state any sort of conclusion.

Abe: I now think the are probably turbidite deposits, which means the Bouma Sequences (see below) were deposited simultaneously.

Well, like I said above, it's a bit difficult for me to know what's going in that picture since I don't really know what the lithologic units are.

If so, those rocks are sandstones, siltstones, and limestones, and the the actual depositional setting appears to be the submarine environment. The channel, instead of being stream-cut, may instead be the result of underwater gravity-induced 'slides' - similar to a landslide. These sediments are not likely to have been lithified, but they were somewhat consolidated/compacted prior to being eroded.

From the photo alone, I really can't tell if those layers are turbidite-deposited, but they do have the look of it, and the other images appear to suggest they are.

That means some of the layers were deposited simultaneously. The heavy stuff (gravels, etc.) will settle out first and the finer muds last. The layers are graded and the sequence of layers is called a Bouma Sequence. In some settings, these sorts of deposits can be found one atop another for several hundred feet, possibly more.


Okay, moving on to The Hakatai Shale
The Hakatai Shale is the next level in the Grand Canyon Supergroup. I realize that these layers are not homogenous and all one substance, but Shale is a new term

What is shale and how is it produced?

Aslan is not a Tame Lion
Minnemooseus
Member


Re: On Angular Unconformities and other wonders
Your photo is from http://strata.geol.sc.edu/PermianBasinTxNMx/pages/049-West-Face.html

Clicking on that photo gets you to http://strata.geol.sc.edu/PermianBasinTxNMx/pages/050-Guadalupe%20Mts-Delaware-Group.html, which seems to be an attempt to explain the geology shown by the photo.

There is also the possibility that there was some soft sediment deformation, such as from the slumping of whole multiple layers.

Perhaps what looks to be the major angular unconformity in the photo is actually just a larger version of a channel scouring and filling.

It is hard to do a great analysis from a photo. But, of course in the context of this forum, that is what we have to work with.


But what is shale?
Thanks moose, but our next layer is called shale, Hakatai Shale. Can you explain how shale is different from, say sandstone or schist?Aslan is not a Tame Lion
roxrkool
Member


Re: But what is shale?
Here are a few good descriptions:

Good descriptions of other sedimentary rocks.


Summary up to the second layer of the Supergroup.
We began with the Vishnu Schist because it is the lowest exposed layer. It is schist, so originally it was sandstone. To get sandstone there first had to be some higher rock source which was weathered, accumulated in a basin, was later compressed and metamorphed into schist. There was clay, which is also a product of weathering mixed in with the sand.

So to this point, rock was created, weathered into smaller and smaller particles until we had sand and clays, washed or blown downhill (eroded) to collect in a basin, settled, compressed and over time, under pressure and heat became schist.

At sometime during this process, magama pushed through the sandstone or schist and over long periods of time cooled to become granite.

Then we began to look at the next level.

The Bass Formation is actually a a composite of several types of material including limestone, conglomerates, ash and other materials. At the very bottom of the Bass Formation is a layer of Ash. This would indicate a period of volcanic activity somewhere and the ash was brought in, likely by wind, and layered over the eroded surface of the Vishnu Schist.

One of the layers is the Houtata Conglomerate which again layers over the Vishnu Schist and likely simply filled eroded valleys in the Vishnu Schist and so is seen to be pinched out, or gradually disappear, in some areas. Conglomerates, as we learned earlier, are made up of rocks that have been worn down and weathered, have rounded edges, that are then cemented into some matrix under pressure, temperature and over time. We can see an example of a conglomerate here.

The important issues are that the Vishnu Schist being eroded at the top shows that biulding up had ceased. It was no longer accumulating things but was higher than the surrounding areas and so was wearing away.

The Bass Formation shows an intruding, and then a retreating sea. We can tell that by looking at the composition of the formation as we move from top to bottom as outlined in Message 115.

This means we see the land lowering to allow the sea in, and then later in the process gradually rising again to make the sea retreat or that sea level rose and later fell.

The next layer, the Hakatai Shale, points to another change in the environment. Shale is much finer grained than sandstone or schist. This tells us that the environment was one of deposits in fairly calm water. From the colors of the shale we can get some idea of the depth of the water where it was deposited, the darker colors being laid down in deeper, oxygen lacking water while the redder ones show greater reaction with iron and a higher oxygen content, most likely from shallower water.

The fact that we see these in bands shows us that the sea level rose and fell cyclicly over and extended period. The overlying sandstone shows a return to a more energetic flowing water.

So, here are the steps so far.

Intially rock is produced somewere. It is weathered and then eroded to sand mixed with the smaller, finer clay, compressed, heated and over time turned into schist.

At some point during that process, magma intrudes into the sandstone or schist.

The whole body is later weathered and eroded which tells us it was exposed for sometime and higher than the surrounding areas. Accumulation stopped and erosion began.

At some time it was once again lower than the surrounding areas and we find a layer of conglomerate, larger weathered rocks cemented together in a matrix. We also find a layer of ash which indicates volcanic activity.

Above that we find a layer of limestone and conglomerate, which from the record left show a sea intruding and then regressing. The sea intrusion could be because sea levels rose and later fell, or becaise the land lowered and later was raised, or a combination of both.

Finally (so far) we find a layer that was laid down in what must have been a coastal swamp with slow moving water that allowed the finest particles to settle out forming shale. The changes in coloring of the shale indicated that the water level rose and fell over time. And capping that we find more sandstone and conglomerate indicating a return of more active water flow.

Now for the big question. It seems that this last layer is the first to actually show signs of live, but only of cyanobacteria. Is this correct?


Re: Summary up to the second layer of the Supergroup.
That was a pretty good summary. The only thing I guess I would mention or suggest is to start thinking or practicing thinking of the rocks from bottom to top - the order of deposition. It takes some getting used to, but once you get the hang of it, the processes might start making more sense.
I believe the first signs of life in the Grand Canyon are visible in the Bass Limestone. I recall reading about stromatolites in the Bass.


Great, glad it passed. Now we can move on.
The next layer is the Shinumo Quartzite.

Quartzite has been mentioned once before, you said that the sandstone layer that became schist would have become quartzite if it had not contained clay.

So before we go too far into this layer can you tell us a little about quartzite, how it differs from schist and shale? Also generally can you remind us what they tell us about differing environments?


Re: Great, glad it passed. Now we can move on.
I'll have to read a little about this one first. I think this one is a pretty interesting unit. Generally, 'quartzite' is a metamorphic term, but the Shinumo is underlain by a shale (not a slate, which is metamorphosed shale) and the Dox Formation, which is also unmetamorphosed (as far as I know) sedimentary rocks. It's pretty hard to sandwich a metamorphic layer between two unmetamorphosed units.

My guess is that the Shinumo is not the result of metamorphic processes, but simply a well to strongly cemented sandstone. I'm going to go read now. :)


Shinumo
Well that's a question that will come up later anyway as there are several layers that include slate IIRC.Aslan is not a Tame Lion
jar
Member


Where we are?
Just a short post to keep us aware of where we are in our climb from the bottom of the Grand Canyon.

We are now into looking at the third layer of Group 2. 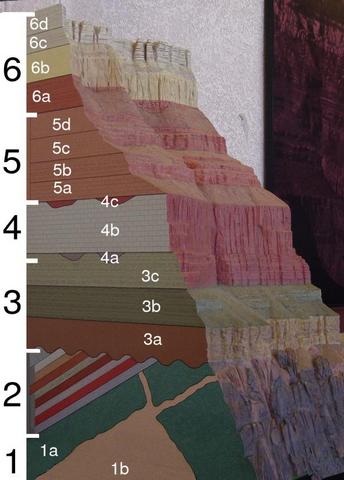 
Re: Where we are?
Jar, I can't seem to find anything (easily accessible) that discusses the Shinumo in more detail; however, in the Grand Hikes link it states:

It's pretty clear that in this case, the term 'quarzite' refers to a rock of sedimentary origin that has been strongly cemented - in this case with silica cement. (Apparently I did not read this link very well since I missed the reference to silica cement.)

Without reading a more detailed description of the Shinumo, I can't offer more on the presence of the 'silica cement.'

Let me see if I understand this because if I have it right, maybe we can make another summary and move on. Sounds like we may have found that express elevator I mentioned earlier.

As I understand it, Silica Cement is the product of diatoms, the carcasses of microscopic shelled critters, that have disolved in water and then precipitated out to form the cement. Is that correct?

AbE: The point I want to emphasize is that what we are looking at in this case is the product of several processes. The main part is reprocessed rock, rock that has been weathered and eroded and that was then cemented together by a cement that is also an example of reprocessing, diatom carcasses that have been disolved and formed the cement.

Aslan is not a Tame Lion
Newer Topic | Older Topic Jump to: